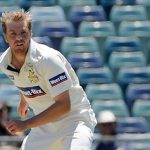 PERTH: Shock Australian Ashes selection Michael Beer has admitted even he isn’t sure he is ready for his Test debut in the third Ashes tie against England, starting on Thursday at the WACA.

The 26-year-old left-arm finger spinner, third in line for a place in the Victoria side just 12 months ago, finds himself picked for the crucial match after just five first-class games for his adopted state of Western Australia.

Beer’s selection makes him the 10th specialist spinner to be tried since the retirement of champion leg-spinner Shane Warne.

Beer, who switched to WA during the off-season due to the lack of opportunity in Victoria and only made his first-class debut in October, has taken a modest 16 first-class wickets at 39 runs apiece.

Speaking after his first training session for Australia on Monday, Beer conceded he was entering the unknown in making his Test debut.

“That is a hard one,” Beer said when asked if he was ready for Thursday’s game.

“I am looking forward to the challenge and hopefully… I am confident in my own ability in a contest and hopefully that comes out shining.

“I love a challenge and I am just running off that.

“I think it is just knowing my role and executing it as best I can.”

However, Beer said he was a much better bowler than just a few months ago.

“I am (better) at a number of things, from on the field, the way I bowl, to my professionalism off the field,” he said.

“There are a number of things I have worked on and I hope to keep improving.”

One thing in Beer’s favour is that he has played against the English, returning match figures of 5-207 from 40.4 overs at worse than five runs per over, in the opening tour match last month.

“I think it will definitely help, being in the same surroundings and I’ll take a fair bit out of that contest I had with them,” he said.

“I enjoyed that and learnt from it.”

At least a couple of Beer’s wickets came when the English threw caution to the wind chasing quick runs in the three-day match, which the tourists won outright.

It was Warne who suggested the Australian selectors look at Beer, and calls for the retired leggie to make a shock comeback have coincided with Beer’s surprise call-up.