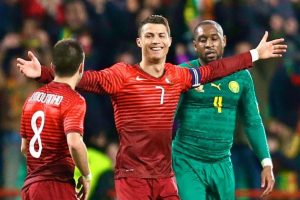 Cristiano Ronaldo’s first goal of the World Cup earned Portugal a 2-1 win over Ghana but couldn’t prevent his team being eliminated from the tournament along with the Africans on Thursday.

Portugal finished level on four points with second-place United States in Group G but with an inferior goal difference. Germany topped the group after beating the U.S. 1-0 in Recife.

Ronaldo slammed in the winner with his left foot in the 80th minute to break his drought in Brazil and give Portugal its first win.

Ghana captain Asamaoh Gyan’s 57th-minute header canceled out an own goal scored by teammate John Boye in the 31st.

It was a bittersweet ending to the World Cup for Ronaldo, who has been nursing a left leg injury and seen the likes of Brazil star Neymar and Argentina captain Lionel Messi upstage him.

He barely celebrated his strike in the Brazilian capital, knowing his team still needed more goals – or a seismic turn of events in Recife – if Portugal was going to sneak into the last 16 at the Americans’ expense.

In the end, Ronaldo actually had two great chances in injury time, but glanced a close-range finish over the bar and then shot straight at Fatawu Dauda when one on one with the goalkeeper.

Being awarded man of the match will be of little significance to the world player of the year.

The result brought to an end a typically eventful few weeks in Brazil for the Ghanaians, who were part of thrilling games against the United States and Germany before their campaign ended in turmoil on and off the pitch.

Their players took to the field in the Brazilian capital amid a dispute with the country’s football federation over alleged unpaid World Cup bonuses. Adding to the chaos, two of the team’s star players – Sulley Muntari and Kevin-Prince Boateng – were booted out of the squad hours before Thursday’s kickoff for disciplinary reasons.

It was perhaps no surprise that Ghana delivered its most subdued display of the tournament, allowing Ronaldo time and space to enjoy his most lively performance in Brazil.

He walked off at halftime with his head down and likely wondering how he hadn’t opened his account in this World Cup by then.

An over-hit cross in the fifth minute flew over Dauda and slammed against the bar before the Real Madrid superstar squandered a gilt-edged chance, heading straight at the keeper from six yards (meters) out.

After having two stinging shots saved, he was bailed out by Boye, who sliced Miguel Veloso’s cross into the top corner of his own net to give the Portuguese a halftime lead