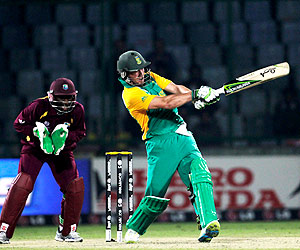 A classic 73 by Darren Bravo was the lone bright spot for the West Indies, who also had a injury scare with all-rounder Dwayne Bravo twisting his knee and leaving the field midway.

South Africa, who entered the match with three spinners, bowled out the West Indies for 222 with Tahir taking four for 41. off-spinner Johan Botha (2-48) opened the bowling and removed dangerous Chris Gayle. Dale Steyn (3-24) did a clinical moping up operation of the tail.

South Africa then batted with authority despite losing two early wickets. After losing Hashim Amla and Jacques Kallis, skipper Graeme Smith (45) and De Villiers (107) took control with a 119-run stand to bring the innings back on the rails.

Kieron Pollard dismissed Smith, but South Africa did not wobble like the West Indies. De Villiers and Jean Paul Duminy shared an unbeaten 84-run stand to see them through.

After a brief rain halt, De Villers, whose 105-ball knock had eight fours and two sixes, came back to complete his century and take South Africa home in 42.5 overs.

The pitch at Ferozeshah Kotla, which was hosting its first match after a one-year ban for producing a “dangerous” wicket for a India-Sri Lanka game in 2009, looked a belter.

The West Indies had their chances to score in excess of 250, but they lost the plot in the death overs, losing their last five wickets for just 14 runs.

Smith, who elected to bowl, came out with three spinners — Botha, left-armer Robin Peterson and Pakistan-born Imran, using them in short, productive spells.

Smith had another ace up his sleeve as he opened the bowling with off-spinner Botha, reminding one of Deepak Patel, the off-spinner who opened the New Zealand attack in the 1992 World Cup.

Botha responded with the prize wicket of Chris Gayle with the third ball.

The ball pitched outside off and turned a bit away from Gayle, who edged it to first slip Jacques Kallis. It was apparent from then on that the pitch would help the spinners. There was more drama in the first over as Darren survived a loud leg before appeal.

Darren then tok centrestage and looked like a man on mission. The half brother of Dwayne and a cousin of Brian Lara entertained the spectators with his striking range of strokes.

An exciting left-hander, Darren struck eight fours and a six, raising a stand of 111 runs for the second wicket with opener Devon Smith (36).

Darren is highly rated and draws instant comparison with Lara because of his diminutive frame and his batting stance has a striking semblance to that of the West Indian genius. The youngster stroked freely, taking on the South African attack with authority. He struck Steyn for two fours when the fast bowler erred in his line in the second over.

A six off Tahir over mid-on showed that Darren is equally good against spinners. His 82-ball knock was studded with eight fours.

As Darren loooked to be cruising along for a deserving century, Botha provided the breakthrough, trapping him lbw. Smith followed soon, caught and bowled by Tahir, becoming the leg-spinner’s ODI debut wicket.

The West Indies at one stage were well placed at 113/2, but showed a clear lack of ideas and application in not getting to a more challenging total.

Shivnaraine Chanderpaul (31) and Dwayne (40) looked in command as they put on 78 runs for the fifth wicket, but once they were separated, the West Indies struggled in the slog overs.

Dwayne struck three sixes, with Chanderpaul holding his end up. But Dwayne was run out after a mix up and Chanderpaul fell to Tahir, triggering a late collapse.