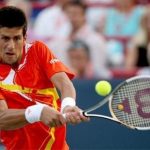 BELGRADE: Local hero Novak Djokovic put Serbia in line for their maiden Davis Cup crown Sunday with a crushing 6-2, 6-2, 6-4 defeat of Gael Monfils which pulled the hosts level 2-2 with France.

French hopes of a 10th crown now rest with Michael Llodra, who will line up against either Viktor Troicki or Janko Tipsarevic in the fifth and final rubber.

Serbia were left on the ropes after Llodra and Arnaud Clement handed France a stunning comeback victory in the doubles on Saturday.

However, Djokovic helped redress the balance with a commanding display of tennis which seemed to leave Monfils, who won his opening rubber on Friday against Tipsarevic, frozen out of the game.