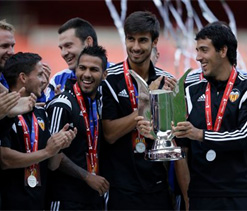 Colombian striker Radamel Falcao scored the only goal of the game as he converted a free header from the edge of the six-yard box just before halftime.

Arsenal, who miss out on winning their home tournament for the first time in four years, felt that they should have been awarded a late penalty, The BBC reported.

Summer signings Alexis Sanchez, Mathieu Debuchy and Calum Chambers made their first starts for Arsenal in the game.

Having won 5-1 against Benfica in their first match, Arsenal struggled against the Ligue 1 club and created little in the way of clear-cut chances, with Sanchez rarely on the ball.

Monaco`s Falcao, starting a game for the first time since a serious knee injury in January, opened the scoring on 37 minutes.

Arsenal substitute Chuba Akpom was brought down by visiting goalkeeper Danijel Subasic as he burst into the box, only for referee Martin Atkinson to award a free kick rather than a penalty, despite replays showing the foul was clearly inside the area.

Spanish side Valencia won the tournament after coming from behind to beat Portugal`s Benfica 3-1 in Sunday`s early kick-off, the report added.