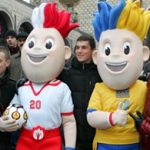 Prague: Preparations for Euro 2012 in Poland and Ukraine, a major headache until earlier this year, are well on course and three of the eight stadiums have been completed, UEFA said on Friday.

The announcement came almost exactly one year after Ukraine were given a reprieve by European soccer’s governing body, which had refused to confirm three of their four cities as hosts because of the slow progress of work on hotels, stadiums and other infrastructure.

UEFA secretary general Gianni Infantino said that two of the four stadiums in Ukraine — at Kharkiv and Donetsk — were already finished.

“Work in the four cities in Ukraine is progressing well… Kiev and Lviv are on track with some issues at airports, which are all being renovated, the projects are promising and everything will be done in time.”

He was similarly optimistic about Poland, where the Poznan stadium has been finished.

“We are a little behind the ideal schedule on the practical implementation of security, transport logistics and other things, but in general it is well on track and we are confident that, with the collaboration of governments, it will all be ready on time.”

Infantino, following a meeting of the executive commitee, said that payments to its member associations as part of its so-called HatTrick programme would increase by 15 percent over the four-year period from 2012 to 2016.

He said each of UEFA’s 53 member associations would receive a total of 9 million euros ($11.92 million), provided they fulfilled commitments which included taking part in lesser competitions and took part in UEFA initiatives on coaching and grassroots-level football.

UEFA have also agreed to a yearly payment of 100,000 euros to support the development of women’s football, starting from 2012.

He said there were now 950,000 registered women’s footballers in Europe with 45 of the 53 associations taking part in women’s competitions.

UEFA also decided that from 2012, the final two rounds in the group stage of the Europa League would be played slightly earlier, taking place in the same weeks as the Champions League games. This would free up extra dates during the winter period, UEFA said.