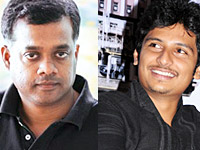 Gautham Menon is going to direct Jeeva in his next film. Now, we are bringing you some interesting pieces of information about the film.

The film has been titled as Nithya and it looks like the film has been named after Jeeva’s character in the film. The films principle photography has to start on August 5th, 2011 but it was postponed as the director’s health suffered a setback.  Now that the director is well, the film is going to hit the floors on August 29th, 2011. Jeeva has recently completed his part for Nanban and is gearing up to shift over to Gautham’s project.  The actor all excited to work with Gautham Menon and is looking forward for the shoot to begin.

Gautham’s favourite actress Samantha Ruth Prabhu is going to share the screen space with Jeeva in Nithya. Nithya is said to be a breezy romantic entertainer blend with some action and is there any missing aspect for the film to be a commercial hit.

The technical crew consists of Gautham’s favourite musician AR Rahman to compose the music, his trusted cinematographer Manoj Paramahamsa to handle the camera and Anthony Gonsalvez for editing.