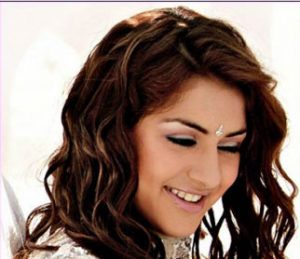 Hansika without any release in Tamil cinema is the hottest heroine in the southern circuit.

In Telugu, she is rocking and has just signed her third film with Siddharth. Dil Raju is producing the film, a triangular love story where she will share screen space with Shruthi Haasan.

Meanwhile Hansika is still waiting for that huge splash in Kollywood with a line of releases this year.

Industry watchers are predicting that she is the next big thing, as every top banner and hero is after her dates.

Her debut film in Tamil, Prabhu Deva directed Engeyum Kadhal will be followed immediately by Mappillai in April.

And in June/July her big budget Velayudham will be released.

Hansika is all smiles as she has completed the talkie portion of this big-budget Vijay starrer. Sources close to the unit say that Ilayathalapaythy himself was awe-struck by her confidence, dedication and dancing abilities.

Hansika will start the shoot of her Rajesh directed Oru Kal Oru Kanaadi (OKOK), a comedy entertainer opposite Udhayanidhi Stalin on March 20. Hanska is an achiever in her own right at such a young age. She is so sure of herself and believes that she has miles to go but is here to stay.