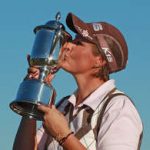 Maria Hjorth took advantage of a huge early stumble from Amy Yang to win the season-ending LPGA Championship in Florida.

Yang suffered a quadruple-bogey on the third hole and, although she was excellent across most of the final nine holes, she could not repair the damage as she finished one shot behind Hjorth.

Hjorth was steady in her round, with three bogeys cancelled out by three birdies, in contrast with a more dramatic round from Yang.

After her adventure on the third, she also bogeyed the fifth to make the turn after five over par on the day.

But three quick birdies on the way back put her back in contention, only for a bogey on the 17th to ultimately cost her as she finished behind Hjorth.

In-Kyung Kim went round in 70 to move up into a tie for third alongside Cristie Kerr, who signed for a 73 as the majority of the field struggled to meet par.

Laura Diaz signed for a 73 to drop back into a share for fifth alongside Na Yeon Choi.