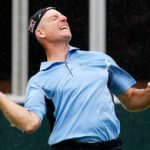 US Ryder Cup star Jim Furyk has been named the 2010 PGA Tour Player of the Year.

PGA Tour commissioner Tim Finchem announced on Saturday at the Chevron World Challenge that Furyk, winner of the season-ending FedExCup series, had won the award after votes had been cast by his player colleagues.

Furyk, a seasoned 40-year-old former US Open champion, earned his first-ever Player of the Year award after winning the Transitions Championship, the Verizon Heritage and the season-ending Tour Championship – more titles than any other player on the Tour this year.

Furyk also finished second on the money list with US$4,809,622 and fifth in adjusted scoring average with a 69.83.

“The year just keeps getting better is all I can say,” a beaming Furyk said. “I’m not sure I want 2010 to end at this point.”

“Jim is a tremendous player, a consummate professional and with three wins and the FedExCup title, his season was certainly worthy of the award,” Finchem said.

Furyk had gone more than two years without a victory when he broke his drought with his win at the Transitions Championship in March.

He then won again a month later at Hilton Head and finally ended the year with a par save from a greenside bunker on the final hole at East Lake to not only win the Tour Championship, but also the FedExCup competition.

He had previously won the PGA of America’s Player of the Year award which was based purely on points, but said his latest award carried more weight with him because it was based on the votes of fellow players.

“This one is very meaningful … having all my peers and colleagues – basically the guys I play against week in and week out – vote for me as player of the year is what’s special,” Furyk said.

Rickie Fowler, who made the US Ryder Cup team in his first year on the PGA Tour, was named PGA Tour Rookie of the Year, while Jamie Lovemark took the Nationwide Tour Player of the Year award