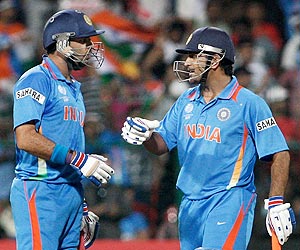 BANGALORE: Yuvraj Singh became the first player in the World Cup to take five wickets and score a half century as India saw off a tenacious fight from Ireland to post a five-wicket victory in a Group B contest here Sunday.

Yuvraj (5-31) took his maiden five-wicket haul with India bowling out Ireland for 207. The stylish left-hander then stroked an unbeaten 50 and together with skipper Mahendra Singh Dhoni (34) added 67 runs for the fifth wicket. The two negotiated the tough phase of the match in the middle overs when Ireland were putting pressure on the hosts with some quality bowling and fielding.

Once Yuvraj got into the groove, he made sure that India reach home without much trouble. Yusuf Pathan used the long handle to good effect, smashing three sixes and two fours for his unbeaten 34, as India crossed the victory rope with 24 balls to spare.

Ireland, who were coming on the back of the sensational victory over England Wednesday, did not harm to their reputation of giant-killers. Despite being bowled out for a paltry total, the Irish showed the stomach to fight and gave the packed 40,000 roaring Chinnaswamy Stadium some tense moments. India were made to work hard for every run on the slow surface and there were no freebies.

Pacer Trent Johnson (2-16) got rid of dangerous Sehwag in the second over. He also dismissed Gambhir and India were soon two wickets down with 24 runs on the board.

Ireland used as many as eight bowlers and gave nothing away. Even with Tendulkar at one end, runs came at a premium. The maestro, whose 56-ball knock had three fours, was finally trapped leg before by left-arm spinner George Dockrell (2-49).

Kohli was run out before Yuvraj and Dhoni joined forces and focussed on rotating the strike. Yuvraj, who has been striving to strike form, bade his time and waited for the right opportunity to chance his arm. His 75-ball innings had just three fours.

Yuvraj was equally effective with his left-arm spin and took the crucial wickets of captain William Potterfield, who scored a fighting 75, and Kevin O’Brien (9), the star of Ireland’s famous victory against England with the World Cup’s fastest century.

After India decided to bowl first, Zaheer Khan (3-30) gave India a good start as he rattled the stumps of Paul Stirling in the first over. He then removed Ed Joyce in his next over and Ireland were two wickets down with just nine runs on the board.

With Zaheer getting good movement from the pitch and the spinners operating with the new ball, Ireland batted with extra caution and scored only 27 runs in 10 overs.

Porterfield and Niall O’Brien then joined hands to add 113 for the third wicket. O’Brien made a well-constructed 46 off 78 balls with the help of three fours, but fell short of a deserving 50, thanks to some good fielding by Kohli.

Andrew White (5) did not stay for long and became Yuvraj’s first victim.

Kevin was dismissed when Yuvraj took a catch off his own bowling. Ireland slipped to 147-5 in 33.4 overs and could never recover.

Porterfield, who batted with purpose, was the next to go, caught by Harbhajan Singh in the covers off Yuvraj. Alex Cusack (24) and Trent Johnson (17) took the score past 200.