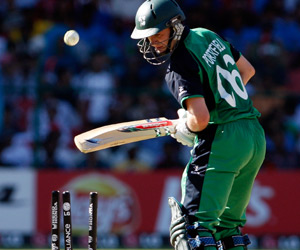 BANGALORE: Down but not yet out is the message a disappointed Ireland skipper William Porterfield sought to convey late Sunday after his defiant team lost to fancied India by five wickets in a low-scoring Group B fixture in the World Cup at the Chinnaswamy stadium in this tech hub.

“It feels sad to lose, that too after an upset victory over England. But I am happy the way we competed against a strong side like India. We have to get over this disappointment and do our best in the next games to win again,” Porterfield told reporters at a post-match briefing.

Regretting that the young team did not have a defendable score to make India chase, Porterfield said losing two quick wickets initially meant they had to first consolidate and build good partnerships to score big as he tried to do with Niall O’Brien but failed to sustain after the latter got run out at a crucial point.

“After putting up a 111-run third wicket partnership, I think we lost the momentum after Niall was run out and we couldn’t recover later, as big-hitter Kevin O’Brien didn’t stay long to score a century again and my dismissal was a turning point in our low-scoring innings,” Porterfield recalled.

On using as many as eight bowlers to check India chase a modest target of 207, the Porterfield said he was exploring the bowling options he had in depth to put the opponents under pressure and save as many runs with his athletic fielders.

“Though we couldn’t defend such a low score, the end would have been different and exciting if only we had put up another 40-50 runs more on the board,” the Irish opener, who scored the highest (75) in the match and the only six in their innings observed.

Noting that his energetic and promising team had an exciting week in Bangalore, winning over England and losing to a home team, the south paw said it was a great learning experience playing two World Cup league matches as they had lot of positives for the next three games.