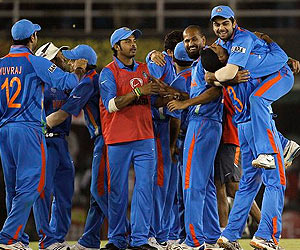 MOHALI: A fortuitous 85 from Sachin Tendulkar was followed by a disciplined bowling effort as India beat Pakistan by 29 runs in a high-stakes semifinal Wednesday to progress to the World Cup final against Sri Lanka.

Pakistan was dismissed for 231 in the last over chasing 261 to beat the pre-tournament favorites.

The 28,000 fans inside the Punjab Cricket Association Stadium went wild in celebrations, shouting, dancing and waving national flags after India carved out a memorable victory against its traditional rival in the presence of the Prime Ministers of both countries.

Pakistan had done well earlier to peg India back to 260-9 despite some sloppy fielding, with left-arm pace bowler Wahab Riaz taking a career-best 5-46.

The victory continued a streak for India, which has beaten Pakistan in all five World Cup head-to-heads dating back to 1992.

The game was touted as a face-off between India’s batting lineup and Pakistan’s bowling attack, but Pakistan’s shoddy fielding was eventually the difference between the two sides.

Tendulkar was let off four times, giving him the opportunity to knit together challenging total for India and the bowlers then ensured a third World Cup final appearance for the 1983 champion.

India piled the pressure on a Pakistan batting lineup which failed to produce a single century in the tournament.

Pakistan’s early promise was slowed down in the middle overs as Yuvraj made early inroads and the bowlers slowly took control, marshalled well by captain Mahendra Singh Dhoni. All five Indian bowlers finished with two wickets each.

The only time Pakistan looked capable of the chase was when openers Kamran Akmal and Mohammad Hafeez were at the crease.

Kamran Akmal slashed a ball from Zaheer Khan straight to Yuvraj at point after making 19, while Hafeez went for an unnecessary scoop off Munaf Patel and was caught behind for 43.

Yuvraj then dismissed Asad Shafiq and Younis Khan and Pakistan was reduced to 106-4 by the 26th over.

Umar Akmal added some interest with a 24-ball 29 and Misbah-ul-Haq made a late charge of 56, but with the ball not coming on to the bat too well later in the day, it was always going to be difficult for them.

Earlier, Riaz exposed India’s traditional weakness against left-arm seamers, striking at crucial junctures. He accounted for a dangerous looking Virender Sehwag and an in-form Yuvraj among others, as the famed Indian batting struggled against his swing.

Pakistan also made Tendulkar wait for his 100th international century despite dropping the world’s best batsman four times. Tendulkar also had an lbw decision overturned on referral and survived a close stumping appeal in what has to be one of his luckiest innings ever.

Tendulkar faced 115 balls and hit 11 fours even as Riaz pegged back the Indian middle order with the dismissals of Virat Kohli (nine) and Yuvraj (zero) off successive deliveries.

Kohli was caught at point and Yuvraj was bowled off a swinging full toss, while captain Mahendra Singh Dhoni was trapped lbw by Riaz a little later for 25.

After opener Sehwag (38) made a blazing start that saw him once hit five fours off an over from Umar Gul, India failed to get a big partnership.

Tendulkar continued to work the ball around in the face of some tight bowling in the middle overs and was lucky to see two clear spilled catches off Shahid Afridi, the tournament’s leading wicket-taker.

Misbah-ul Haq dropped a sharp catch at mid-wicket when Tendulkar was on 27, while the generally reliable Younis Khan spilled an easier chance at short cover on 45.

Wicketkeeper Kamran Akmal was unable to glove a thick edge when Tendulkar was on 70 and he was also let off on 81 by Umar Akmal off Mohammad Hafeez.

He was finally out when Afridi himself took a sharp chance at short extra-cover off Ajmal’s bowling. The Pakistan captain held both arms in the air in a v-shape to celebrate the dismissal.

India got a slight boost towards the end as Suresh Raina struck an unbeaten 36 and India accumulated 43 runs in the batting powerplay taken in the 45th over.