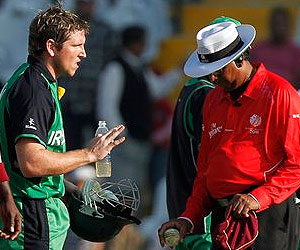 MOHALI: The Umpire Decision Review System (UDRS) once again found itself at the centre of a controversy after Irish batsman Gary Wilson was given a contentious leg before during their 44-run defeat against West Indies in a World Cup Group B match here Friday.

An irate Ireland captain William Porterfield later called it one of the reasons for their loss.

“You use the technology to eradicate a bad decision. In this case it did not,” Porterfield said at the post-match press conference.

Chasing the West Indies’ 275, Ireland were on course for pulling off an upset with Ed Joyce and Wilson stitching 91 runs for the fourth wicket. They lost Joyce and Kevin O’Brien in quick succession but they had Wilson holding one end strong with his 61 runs off 62 balls.

However, in the 42nd over, Wilson when playing a shot off West Indies’ skipper Darren Sammy, was adjudged leg before by umpire Asoka de Silva. Wilson went for a referral but the decision stayed. On seeing the replay on the giant screen, he appealed to the umpire to recheck but De Silva, after a consultation, stuck to his original decision.

Porterfield was not the first captain to criticize the UDRS but the International Cricket Council (ICC) says it has improved the decision-making process.

In fact, in a recent press statement, the ICC said correct decisions had risen from an average of 90.18 percent to 97.82 percent because of the UDRS.

Indian skipper Mahendra Singh Dhoni definitely does not think so, nor does his South African counterpart Graeme Smith, who was far from happy when he was adjudged caught behind during their crucial game against England Sunday.

Dhoni was furious when England batsman Ian Bell was not given leg before during their tied match with India because he was a long way forward.