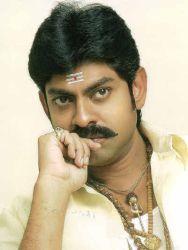 Jagapathi Babu, who is on signing spree these days, is all set to hit a century in his films. Yes, the actor has given his nod for his 100th film to producer Natti Kumar, which will be made under the banner Visaka Talkies.

Jagapathi Babu has recently done Chattam with producer Natti Kumar and the actor has also accepted a couple of other films with the same producer along with his 100th film. Other details of the cast and crew for this landmark film are yet to be finalized.

Speaking to media Natti Kumar says, “Jagapathi babu’s 100th film will be made under our banner Visaka Talkies and we are planning to rope in popular director for the film. The movie will start rolling its camera this year and will hit the screens in January 2012.”