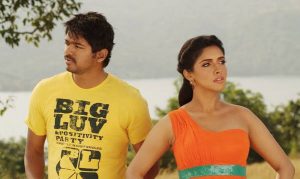 Ilayathalapathy Vijay is in a piquant situation.

It stirred a hornet’s nest, as there were rumours that Vijay was planning to join AIADMK.

The newspapers are full of Vijay’s differences with leading producer Udhayanidhi Stalin. The buzz is that Uday does not want Vijay’s Kaavalan to clash with his home production Manmadhan Ambu, scheduled to release for Christmas.

SAC a die-hard DMK supporter from his early days was forced to seek Jayalalithaa’s help to bail out his son whose career was at stake.

There are also rumours that the star is going to launch his own political party, with the support of AIADMK.

Meanwhile it is almost certain that Kaavalan will release only for Pongal, as theatres across the globe has been blocked by Manmadhan Ambu releasing on December 23.

However a leading distributor cautioned: “If Kaavalan releases for Pongal, it will be a miracle as Ilaignan, Aadukalam and Siruthai has booked all the best screens.