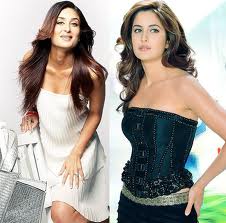 Yes, they indeed have a strong connection. And if we go just by rumours, we believe that B-Town actresses Kareena Kapoor Khan and Katrina Kaif are soon to be sister-in-laws, keeping in mind about Ranbir Kapoor’s rumoured affair with the latter. And that’s what we have seen recently, after the two, who were once supposedly rivals, were spotted bonding like never before on the sets of the movie Phantom.

As per the reports, Saif Ali Khan and Katrina Kaif are currently shooting for their upcoming movie Phantom in Beruit. Kareena Kapoor too was spotted accompanying hubby Saif on the movie sets. Interestingly, Bebo and Kat were seen chit chatting and sharing some healthy conversation with each other. Bebo Spends Time With Katrina! In the past, it was rumoured that Kareena Kapoor had a tiff with Katrina Kaif, after the rumours revealed that that two girls were fighting with each other over the importance given to their roles in actor Salman Khan’s Eid release Bodyguard.

While Bebo was the film’s leading lady, Kat made an appearance with Salman. But later, Kareena refuted all such rumours, claiming,”Why should there be a problem between the two of us? Both of us do our own films. I am busy doing mine, while she has her share of work. Also, I am here to do my job”. Bebo further expressed her liking towards Katrina saying, “She is a lovely girl and we have always been friendly. Such talk is really strange”.