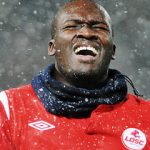 Lille edged clear at the top of Ligue 1 but may live to regret dropped points after being held to a 1-1 at home by Saint-Etienne.

Paris Saint-Germain’s defeat at Nancy meant a point was enough to give Lille sole possession of first place, but it will still be seen as two points dropped as Bakary Sako’s controversial 75th minute penalty gave Saint-Etienne a share of the prize, cancelling out Moussa Sow’s strike three minutes earlier.

PSG’s title hopes were dealt a blow as they suffered their first defeat in almost two months, going down to two late Nancy goals after playing almost 80 minutes with 10 men.

Romain Hamouma scored the only goal as Ligue 1 strugglers Caen secured a welcome 1-0 victory over Rennes, another high-flier to have their wings clipped this evening.

Hamouma pounced after just eight minutes, and the hosts managed to keep their high-flying visitors at bay for the remainder of the match.

Lyon also missed the chance to go top at Christmas as they were held to a 1-1 home draw by Auxerre.

The seven-time champions led at the break after Jean-Pascal Mignot put through his own goal, only for Julien Quercia to level straight after the interval.

Brest and Marseille cancelled each other out in Brittany.

The reigning champions have hit a sticky patch of form in recent weeks, with Sunday’s 1-1 draw with Lyon extending their winless run to four games.

It became five tonight as Brest survived a second-half onslaught to deny the visitors, who had Charles Kabore sent off shortly before full-time.

Guy Lacombe’s side had led through Chris Malonga until Igor Lolo’s own goal brought Sochaux level.

However, Park kept his cool in added time to slot home the winner and hand his team three much-needed points.

Valenciennes came from behind in an action-packed end to the first half as they claimed a notable scalp in Toulouse.

The visitors took the lead through Moussa Sissoko after 34 minutes, but VA turned things around in the space of three minutes at the end of the first period.

First Benjamin Angoua headed the hosts level, then Gael Danic pounced in in the last minute of the half to make it 2-1.

Arles remain hopelessly adrift at the foot of the ladder after a dismal goalless draw at home to Nice.

Bordeaux came from two goals down to deny Ligue 1 strugglers Lens a rare win as captain Alou Diarra scored then saw red in a 2-2 draw.

The visitors were 2-0 up at half-time thanks to strikes from Eduardo and Abdoulrazak Boukari, before Diarra pulled one back in the 67th minute.

The skipper then picked up two yellow cards four minutes later, but his team-mates made light of his absence and Yoan Gouffran scored a leveller in stoppage-time.