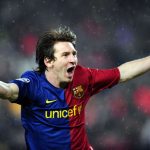 Buenos Aires: Argentina are looking to win the Copa America on home ground next year and end the doubts in fans’ minds about Lionel Messi’s commitment and ability when playing for his country, coach Sergio Batista said.

In the calm of Argentina’s training complex outside the capital, far removed from the bustle of Diego Maradona’s controversial spell in charge of the team, Batista said he was confident Messi would finally win over the fans during the tournament in July.

“He’s had very good games, he always gave of his best in the national team shirt…To heap so much responsibility on Lionel seems unfair to me,” Batista told reporters in an interview.

“He has to go out, play and enjoy and we try to build a team on the basis of what Lionel is,” the 48-year-old Batista said.

“That Lionel should feel comfortable within a system we propose on the pitch is pleasing because he’s the best player in the world and to have him in good spirits is good.”

Messi, who was in Batista’s Olympic gold-medal team in 2008, was FIFA player of the year in 2009 and is on the short list of three for this year’s award with Barcelona team mates Xavi and Andres Iniesta, World Cup winners with Spain in South Africa in July.

“What happens with Lionel is that he is burdened with many things, like having to be the team’s saviour. To play for Barcelona is one thing and in the national team another,” said Batista, Maradona’s team mate in Argentina’s 1986 World Cup-winning team and now his successor as coach.

“We try for him not to have pressures, relieve all the pressures when he comes to the national team so that he can enjoy the camp, the life with his team mates; we don’t pressure any of the players and we’re convinced that’s how they can feel content.”

Batista was named as interim coach after Maradona was not retained and departed accusing team manager Carlos Bilardo and Argentine Football Association (AFA) directors of treachery following his team’s 4-0 humiliation by Germany in their World Cup quarter-final in Cape Town.

The AFA confirmed Batista in the job in November.

“We got a positive balance, not only because of the results but also the way we managed our work and the tranquillity there has been in the team, getting to know the players,” said Batista, whose quiet temperament contrasts with Maradona’s.

“I have my vision of football and I like the football played by Barcelona and I’m convinced Argentina can achieve that.”

Messi has shown his support for Batista, saying after last month’s win over Brazil in which he scored a brilliant late winner that he felt as comfortable with Argentina as he did in his club side, something that was patently not the case during the World Cup qualifiers last year.

The Copa America could be the ideal setting for Messi to silence his critics and for his team mates to recover the form they showed in Argentina’s early matches at the World Cup which had fans dreaming of a new title.

“He doesn’t have to prove anything. Yes, for the squad, for his team mates he’s the best in the world, but (we must) not burden him with that responsibility of Lionel having to win the Copa America on his own,” Batista said.

Argentina have gone 17 years without a major trophy since their last Copa America victory in Ecuador in 1993 and they lost the last two finals in 2004 and 2007 to arch-rivals Brazil. They are in Group A with Bolivia, Colombia and guest team Japan.