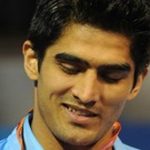 New Delhi: It started with an unprecedented gold rush and ended pretty much the same way as Indian boxers scaled new heights and broke new barriers with Olympic hero Vijender Singh once again leading the charge by clinching two gold medals and a bronze in a super successful 2010.

Just a month later, the boxers landed half a dozen gold medals with a cracker of a performance in front of adoring home fans in the Commonwealth Championships.

This was Vijender’s first gold medal in two years, adding to the aura of the strapping six-footer, who remained the world number one from beginning to the end of 2010 — his supremacy at the top unchallenged.

The championship, in fact, was just a prelude to a fantastic performance in the Commonwealth Games that were to follow six months later, again in the capital.

In the build-up to the Games, Vijender and Co took went for a month-long trip to Cuba to get battle-hardened in the ‘spiritual home of boxing’ and the improvement was there to be seen when they finally took the ring in the main-event.

Even as the Commonwealth Games Federation complained of lack of crowds at CWG venues, the dome-shaped Talkatora Stadium was witness to an atmosphere which can only be described as electric in every single session of the boxing competition.

Fans queued up as the likes of Vijender, Suranjoy and Akhil Kumar (56kg) began their gold quest in the biggest sporting event India was hosting since the 1982 Asian Games.

It turned out to be a bitter-sweet campaign in the end with Vijender settling for bronze after a controversial loss in the semifinals and defending champion Akhil signing off without a medal following a quarterfinal defeat.

But Suranjoy, Manoj Kumar (64kg) and Paramjit Samota (+91kg) ensured that Indian boxing pulled off its best-ever performance in the Games history by notching up gold medals.

But Vijender’s loss was a massive disappointment as he went down without conceding a single scoring punch when the referee penalised him twice for clinching and holding on to his rival in the semifinal.

However, the poster boy of Indian boxing took the setback on his chin and promised a gold in the Asian Games which took place just a month later. And he delivered the goods at his happy hunting ground, China where the event was held in the city of Guangzhou.

There was skepticism that the boxers, who got just a month to rest and recover after the CWG, would under-perform in the Asiad but all such fears vanished once the competition began as Indian pugilists fetched two yellow metals at the event for the first time after Dingko Singh’s gold in 1998.

In the end, the Indian boxers managed a brilliant haul of two gold, three silver and four bronze medals without showing any sign of fatigue.