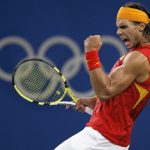 London: Rafael Nadal and Caroline Wozniacki have been named ITF World Champions for 2010.

Nadal, who won the French Open, Wimbledon and the U S Open, won the award given by the International Tennis Federation for the second time.

Wozniacki, a Dane who won six tour titles this year to take the No 1 ranking but failed to reach a Grand Slam final, won for the first time.

Nadal, who completed a career Grand Slam by winning in New York, says “after a difficult year in 2009, it was an amazing feeling to regain the No 1 ranking and finally win the U S Open.”

In doubles, Bob and Mike Bryan won the men’s award while Gisela Dulko and Flavia Pennetta won the women’s.