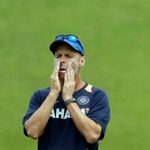 Centurion: The pre-series verbal war has set the stage for an electrifying battle as India gear up to face a hostile South Africa in the first of a three-Test cricket series to not just prove themselves as worthy world number ones but also improve their unarguably poor record.

Described as the “final frontier” by coach Gary Kirsten, world number two South Africa will challenge India`s number one status like no other side has in more than a year when the series kicks off at the Super Sport Park.

Graeme Smith`s men will look to exploit the Indian batsmen`s well-known susceptibility to the rising deliveries on bouncy tracks here and the hosts have the necessary arsenal to do that — the most potent of their weapons being world number one pacer Dale Steyn.

The Indians go into the series well aware that they have won just one out of the 12 Tests they have played in the rainbow nation. Even if they didn`t, the Proteas have not missed an opportunity to remind the visitors of the unflattering record ever since their arrival.

In fact, the pre-series verbal sparring has added the ting of drama to the series which would make the contest even more interesting.

When South African coach Corrie van Zyl stated that “record books don`t lie” in an apparent reference to India`s over the years poor showing here, India coach Gary Kirsten was quick to retort that things have changed in the past couple of years.

Indeed, things do seem to have changed as the Indians have been on a dream run in the Test arena, winning seven of their last nine series, but most of them have come on the turning tracks of the sub-continent.

The pace and bounce of South Africa would not be as easy to adapt considering the visitors go into the series without playing a single warm-up match.

Add to this, the Indians also have to deal with a couple of injury worries in pace spearhead Zaheer Khan and S Sreesanth. Zaheer suffered a hamstring injury during the fourth ODI against New Zealand while Sreesanth hurt himself during training.

Zaheer and Sreesanth are crucial to the team`s chances given the conditions and it would be a massive jolt if they are ruled out.

The conditions, in fact, would prove to be India`s biggest challenge against a quality opposition but captain Dhoni said the his side is ready with a blend of youth and experience to record their first Test series win in South Africa.

“It will be important for us to adapt to the conditions. Yet I believe we will be better prepared than before, because the guys have played here in the IPL and in the Champions League and it is not that foreign to them,” Dhoni said.

“We do not pay attention to what history says about what happened here in the past. We do not think too much about the statistics,” he added.

Dhoni`s confidence does not seem misplaced considering the Indian batting line-up boasts of the iconic Sachin Tendulkar, who would be gunning for his historic 50th Test ton, the aggressive opening duo of Virender Sehwag and Gautam Gambhir and the ever-reliable middle-order mainstays Rahul Dravid and VVS Laxman.

Suresh Raina provides the touch of youth and it would be interesting to see how the likes of Steyn, the lanky Morne Morkel and the exciting Wayne Parnell unsettle such a formidable combination.

In comparison, the South African batting may not be as experienced but it is no less dangerous with Smith being the rock.

The inspirational captain has veteran all-rounder Jacques Kallis, the prolific Hashim Amla and the in-form A B de Villiers for company in an impressive order which would be difficult to contain in home conditions.

The hosts have the edge on the bowling front with the tearaway pace of Steyn being the major difference.

India would be looking mainly towards Zaheer to provide the spark with Ishant Sharma and Sreesanth doing the back-up job.

Given the interesting build-up, it promises to be a mouth-watering contest between two sides who are battling it out to fill in the void that has been created by Australia`s decline as the clear numero uno team in the world.

The only spoilsport could be the weather with the forecast of rain here this week.