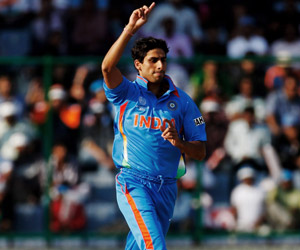 NEW DELHI: India suffered a blow ahead of the World Cup final when left-arm seamer Ashish Nehra was ruled out due to an injury he suffered during the semi-final against Pakistan at Mohali on Wednesday. Nehra, who needed medical attention on the field when he attempted to catch Shahid Afridi at midwicket,

is learnt to have suffered multiple fractures on his fingers in the right hand. Nehra could be out for six weeks since his injury requires surgery. Nehra had played a crucial role in India’s 29-run victory with an analysis of 10-0-33-2.