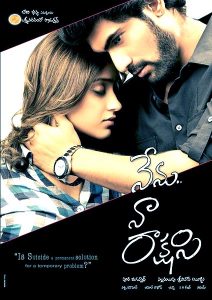 Rana, Ileana starrer Nenu Naa Rakshasi is gearing up for its worldwide release on 29th April. Directed by Puri Jagannadh and produced by Nallamalupu Bujji under Lakshmi Narasimha Productions banner, the movie has completed its censor formalities.

Speaking to media, Puri Jagannadh says, “Nenu Naa Rakshasi has been my favorite subject out of all the films I’ve done earlier. Rana and Ileana are extremely good. Vishwa & Rahman’s audio are already hitting the chartbusters list and Anoop Rubens re-recording is refreshing. I’m sure Telugu audiences will like NNR.”

Rana said, “I’m happy to do my second flick in Telugu with top director and the film will definitely earn me a good name. The scenes in the film are refreshing and you might not have seen them in any other language films too. Ileana looked extremely good and performed well.”

Ileana said, “This is my 2nd film with Puri Jagannath after Pokiri and one of my best roles till date. I was completely satisfied with my role in the film. Rana did a great job in the movie. NNR will be one of the best films in my career.”