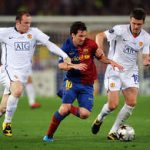 Valencia coach Unai Emery does not believe Manchester United are quite at the same level as Spanish giants Barcelona and Real Madrid.

Emery takes his side to Old Trafford on Tuesday looking for a win that would not only mean the United defence had been breached for the first time in this season’s Champions League but would allow Valencia to leapfrog their opponents to claim top spot in Group C.

Yet, even if they fail in that quest, Emery does not feel Valencia will be meeting the side who should be regarded as favourites to conquer Europe at Wembley next May.

“Real and Barcelona are the best two club sides in the world,” he said.

“Manchester United are almost level with them but I think they are just behind.”

As Valencia cannot be paired with Real, who defeated them at the weekend, or Barca in the first knockout round, it could be argued United have the greater incentive to achieve a positive result.

Emery is not so sure.

With David Silva sent to attend the game and cheer on the club he joined as a 14-year-old and spent a decade with before joining Manchester City for £24million last summer, Emery feels Valencia have a wider motive.

“At the start of the Champions League we had two aims,” he revealed.

“There are many reasons for doing that. For us it is not about wanting to avoid certain opponents.

“We want to show to the rest of Europe that we can produce a top performance at a big club.

“There are so many good teams in this competition. We want to get a result that will make other teams take notice of us and stand us in good stead for the remainder of the tournament.”

Goalkeeper Cesar Sanchez had been a doubt with a calf injury.

However, Sanchez has travelled, which Emery views as a major positive and the former Tottenham man should start.