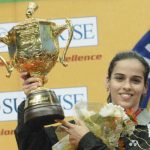 “It was the last tournament of the year and I am happy that I won it,” she told the media and scores of her fans waiting outside the Rajiv Gandhi International Airport here.

She said she was not expecting it but was happy that she had defeated the Asian Games gold medallist in the final of the tournament.

Asked if the scintillating three-game title victory over Shixian Wang of China at the event would take her closer to the number one spot, Saina said, “Winning is important not the rankings which keep fluctuating. I am happy that I have been able to maintain consistency of my form. If I go on like performing like this I would sure get the number one spot.”

Sharing details of Monday’s edge-of-the-seat decider against Wang, she said, “I was on the faster side. Hence could not control the shuttle properly but I was confident of my movements. Once I had clinched the second set, I was very much confident that I would pull out the third.”

Describing her opponent as an experienced player, she said it was tough winning against her.