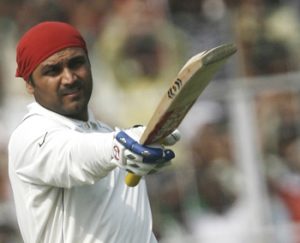 Indian opener Virender Sehwag has been rested from the One-day series against South Africa with a sore shoulder.

Murali Vijay, who is in the Test squad, has been asked to stay back as a back-up opener.

‘Sehwag has been advised to withdraw from the ODI series against South Africa to tend to his shoulder,’ BCCI secretary N. Srinivasan said in a statement.

‘Rohit Sharma will replace him in the squad. Murali Vijay will stay back in South Africa for the ODI series as the 17th member of the squad,’ he said.

Sehwag missed the Twenty20 World Cup in May due to a shoulder problem and clearly the team management does not want to take any chance with the ODI World Cup slated for February-March.