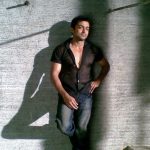 That ‘Maatraan’ would hit the screens in Telugu as ‘Duplicate’ is no more news. But the news is that Suriya would personally dub for the film! “Yes, I will speak on my own for my character. I am thrilled about it,” he says.
In a lighter vein, he says, “My younger brother Karthi is already dubbing on his own in Telugu and films like Aawara (Paiyaa) have fetched him good name. I am sure I will beat him by personally dubbing for Duplicate.”

Expressing gratitude to Telugu audience for their support to his family, Suriya said, “It is great news that movies starring me and Karthi are expected in Andhra Pradesh. We are thankful to the overwhelming patronage here.”

On ‘Neengalum Vellalam Oru Kodi’, the Tamil version of ‘Kaun Banega Crorepati’ which is currently hosting on Vijay TV, Suriya said, “I was bit nervous since this is my first television show as an anchor. But things are cool now.”