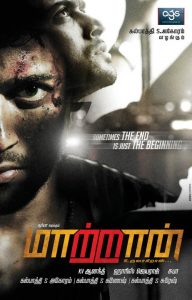 Director KV Anand is currently enjoying the success of his latest release KO which features Jeeva and Karthika in the lead roles. Now he is all set to start his next project Maatran with his Ayan hero Suriya.

Actually Maatran has to take off before KO but due the dates problem the project didn’t take off at that moment. It is well known that Suriya is playing five different roles in Maatran and this is for the first time the actor is playing five roles in one film. As of now Kajal Aggarwal, Taapsee and Samantha are being considered for the female leads opposite Suriya. But rumors are at a buzz that Suriya is not willing to star opposite Taapsee. Maatran is most likely to take off in June as Suriya will be completing his current project 7am Arivu directed by AR Murugadoss.

Director KV Anand is bringing in his favorite crew Harris Jayraj and writer Subha on board for Maatran. AGS Entertainment of Kalpathi S Aghoram is producing the film.