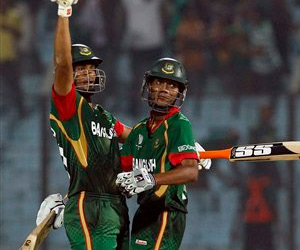 CHITTAGONG: Bangladesh’s players finally gave their country reason to cheer Friday when they clinched a two-wicket win over England that keeps alive hopes of the co-host reaching the quarterfinals.

After the spinners restricted England to 225 all out, Bangladesh survived a minor collapse from 155-3 to 169-8 to bounce back in style from last week’s humiliating nine-wicket loss to the West Indies.

Mahmudullah Riad and Shafiul Islam put on an unbeaten 58 for the ninth wicket to steer their team to 227 and just a second ever win in 15 one-day internationals against England.

Just a week after angry fans hurled stones at captain Shakib Al Hasan’s house and the opposition team bus in protest at a nine-wicket humiliation against the West Indies, Bangladesh can now overtake England in the Group B standings if it beats the Netherlands at the same venue on Monday.

That would likely leave England needing to beat the West Indies in Chennai next week to advance from Group B.

“I always have belief in my team,” Shakib said. “They worked really hard, day in, day out, over last few days. It simply paid off. It proved that we can make a comeback from any situation.

“But frankly it took me for a while to believe that we have won the game.”

After two wins, two defeats and a tie, the only consistent thing about England’s World Cup campaign is the batting of Jonathan Trott, who scored his fourth half century from five tournament innings after Bangladesh had won the toss.

Almost half the 17,451 fans at Chittagong’s Zahur Ahmed Chowdhury Stadium had left, seemingly resigned to defeat, when James Anderson conceded five wides off the first ball of the 45th over to leave Bangladesh needing to score at just a run a ball.

Anderson gave away two more wides and a leg bye off the same over, which went for 11 runs. With the pressure off, Shafiul hit Bresnan for two boundaries off the 47th over

“We thought we were in a great position to win it,” England captain Andrew Strauss said. “You expect to win games from that circumstance. But that is one-day cricket.”

Tamim Iqbal’s 38 from 26 balls got the home side’s reply off to a quickfire start before Imrul Kayes top-scored with 60 in a crucial 82-run stand for the fourth wicket with Shakib (32).

Half centuries by Eoin Morgan and Trott had steered England out of early trouble at 53-3. But in a tournament where England’s bowling was poor for three matches before dispatching South Africa last time out, now it seems the batting also needs work.

“Losing three wickets early with the bat certainly didn’t help us,” Strauss said. “It was a pretty slow, low, stodgy wicket. And we needed wickets in hand to get up to 240 or 250, which would have been a very good score.”

Having arrived in Bangladesh just three days ago as an injury replacement for Kevin Pietersen, Morgan hit 63 to show why England wanted him in its original 15-man squad before he was ruled out with a broken finger.

Shafiul almost found an outside edge with his first two deliveries against opener Matt Prior, whose promotion to a role in which he experienced little success in Australia ended with a bizarre dismissal prompted by some quick thinking by wicketkeeper Mushfiqur Rahim.

Mushfiqur took the bails off to attempt a stumping off a wide from Abdur Razzak’s first ball. Prior was safe but took a step out of his crease, so Mushfiqur ripped a stump from the ground for a quick second stumping — sending Prior on his way for 15 following a lengthy referral from the umpire.

Strauss followed soon after for 18 with an attempted cut off Razzak to Junaed Siddique at first slip, and things got even worse for England when Ian Bell tamely deflected Mahmuduallah Riad’s fourth ball to Naeem at midwicket.