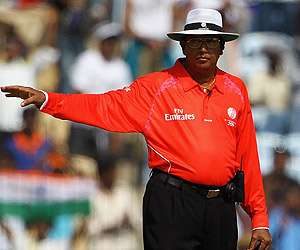 Asoka’s onfield decisions has come under scanner during the World Cup with the most criticised being the decision to give Wilson out lbw even after reviewing the decision twice last Friday.

Among 18 umpires officiating in the World Cup, de Silva’s success percentage in reviewed decisions has been less than 50 percent and hence he was removed for officiating in a couple of key group games that he was originally marked for.

Originally marked to be one of the on-field umpires for the England-West Indies match on and third umpire for the India-West Indies game, de Silva will no more officiate the crucial ties.

Instead, he will be the fourth umpire in the Ireland vs Netherlands match on Friday, and will stand as an on-field umpire for the Zimbabwe-Kenya game on Sunday, according to ICC’s revised schedule.

All the four teams involved in these matches are already out of the World Cup, which makes both the games inconsequential.

ICC general manager, Dave Richardson said the ICC did not want their best umpires to officiate in matches of lesser importance and it was part of a last phase rejig.

“It was part of the re-organising for the last part of the group stage, to ensure the in-form umpires are on the field and in the third umpire’s room for these crucial matches,” Richardson was quoted as saying by a website.

Australia’s Bruce Oxenford, who was originally marked as the fourth umpire, will officiate in place of de Silva in the England vs West Indies match, while Taufel will be the third umpire.

Taufel will also stand as an onfield umpire along with Steve Davies in the crucial India-West Indies match, while Oxenford will be the third umpire.

In the World Cup so far, de Silva’s decisions have been challenged seven times and only on three occasion has his original call stood – one being the lbw decision against Wilson which changed the course of the game.

Wilson, who was batting on 61, reviewed Asoka’s decision, and replays showed that the ball had hit the pad outside off stump. However, de Silva stuck to his original decision, even after having a second look at the decision.

Ireland captain William Porterfield strongly criticised the decision in the post-match press conference and was reprimanded by the ICC.