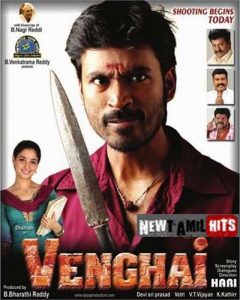 Venghai, starring Dhanush-Tamanna is all set to hit the screens on July 7th, 2011,

Venghai is set in a rural backdrop and it has all commercial elements like action, comedy, love and sentiment. It is a racy subject which will show Dhanush in a different light. Raj Kiran, Goundamani, Senthil, Prakash Raj and others are playing other pivotal roles. The film cleared the censors with an U/A certificate very recently. Commercial director Hari has done the direction for this mass masala entertainer which will appeal all sections of audiences.

Initially Sun Pictures has reportedly snapped the theatrical rights of the film for a record price but later they backed off from the project. The music of the film is released recently and the album consists of 5 tracks with typical DSP mixture of fast numbers with some melody numbers.

Get set to watch this action-packed film soon at cinemas near you!!