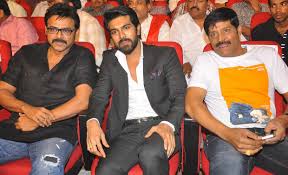 Venkatesh and Ram Charan are set to share screen for a multistarrer movie in Krishnavamsi direction and the latest we hear is the script work has been wrapped and the movie is currently in post-production works.

Super Star Krishna was initially considered for a key role but the actor hasn’t signed up the film later. Now Krishna Vamsi is considering another prominent actor. Meanwhile, the pre-production works of the film are under progress and the makers are currently scouting locales.

Kajal Agarwal and Nayanatara may play the leading ladies. Ganesh Babu will produce the multistarrer movie under Parameswara Arts Production banner. Other details on this Telugu multistarrer film are awaited.