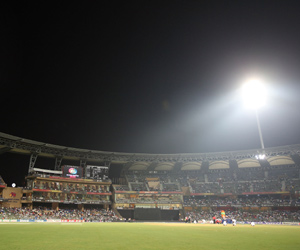 MUMBAI: The Wankhede Stadium wicket for Saturday’s World Cup final will be a slow turner, like most wickets in the subcontinent during this time of the year, says curator Sudhir Naik.

Naik, a former India player, however, insists the pitch will still be full of runs and the team batting first should have the advantage.

“It will be an ideal one-day wicket,” Naik, who toured England with the India team in 1974, told IANS.

Naik feels a score of 270-280 would be very much on the cards in the day-nighter.

“The bounce will be even with a good carry. The pacers will get something out of the wicket in the initial overs,” said the 66-year-old former opener who played three Tests, making his debut at Edgbaston, and two ODIs.

“But the team batting first will be at an advantage as the spinners will get assistance in the second session of the match. But the ball will not turn viciously, it will be a slow turner,” said Naik.

“As it is very hot, the high moisture content may make things difficult for the batsmen in the second innings,” said Naik, who captained Bombay Ranji Trophy team.

Naik, an M.Sc in organic chemistry, said the authorities have already decided to use a chemical spray to reduce the impact of dew on the game.

Excessive dew late in the evening can swing the balance towards teams batting second in day-night matches. The dew will freshen up the pitch and the bowlers will find it difficult to grip the ball that gets damp on a moist outfield.

The International Cricket Council (ICC) had used the chemical spray to reduce the impact of dew at Brabourne Stadium here during the 2006 Champions Trophy match between Pakistan and New Zealand.

The chemical APSA-80, commonly used in agriculture, was also sprayed on the outfield at Mohali in the past.