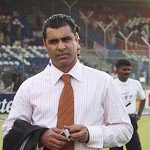 Pakistan coach and former Test captain Waqar Younis on Tuesday said no team could be dubbed as hot favourite for next year’s ICC Cricket World Cup, but said India was looking extremely good at this stage in international cricket.

“But I would say Pakistan is not far behind. In fact, no team is hot favourite for this World Cup since the mega event is a different kind of tournament. In the past, many teams with great names failed to do well in the World Cup while those showing fitness and form excelled,” the former pace ace pointed out,” the Dawn quoted him, as saying further.

“And the way our team is improving, it has a fair chance of performing well in the mega event, although fitness level of the players and improved fielding standards will be the key factors in deciding our fate,” he said.