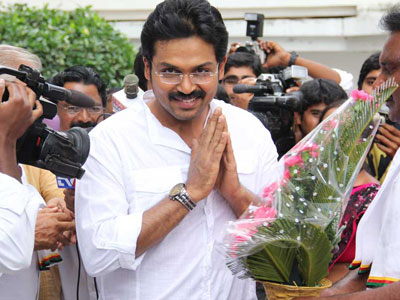 Karthi, the handsome actor who has grabbed the attention of audiences from all the centers from his first film is being buzzed to be entering into politics.

However Karthi seems not interested in the political affairs, as he is not even from the political background. The son of actor Sivakumar and brother of Suriya is line up with many movies in his kitty. Karthi is busy with upcoming movies namely Alex Pandian with Anushka, Santhanam, Sanusha and Nikitha in the direction of Suraaj, Venkat Prabhu’s Biriyani with Richa Gangopadhayay and All in All Azhaguraja with director M. Rajesh.