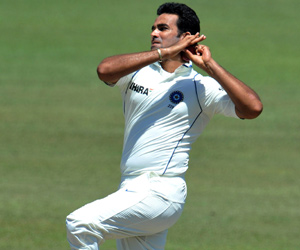 India take on Bangladesh in Dhaka’s Sher-e-Bangla National Stadium in a re-match of their previous World Cup opener which they lost by five wickets and were subsequently ousted from the first round.

“Zaheer looks fit as of now, though I haven’t talked to the physio yet,” said Dhoni.

“But he is fit at the moment. If there is anything else I will let you know.”

Zaheer, who is suffering from a lingering shoulder injury, was not risked for India’s two practice matches against Australia and New Zealand before they leave home for Bangladesh.

The Indian pace attack, without Zaheer, managed to take only three wickets between them while going for plenty of runs in the two practice games which India won.

The Indian pace battery of Ashish Nehra, Shanthakumaran Sreesanth and Munaf Patel were allowed to bowl only 24.1 overs between themselves in the two warm-up games to avoid injuries.

India has already lost paceman Praveen Kumar to an elbow injury before the World Cup and was replaced by Sreesanth.

India also had injury concerns for Virender Sehwag, Gautam Gambhir and Sachin Tendulkar but they all are expeted to play against Bangladesh.

Sehwag and Gambhir missed their entire recent one-day series against South Africa with a shoulder and hand injury respectively while Tendulkar returned home after two games with a hamstring problem.