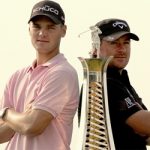 London: US PGA champion Martin Kaymer and US Open winner Graeme McDowell achieved a first on Tuesday by being named joint winners of the European Tour’s golfer of the year award.

Golfing media judges were unable to separate the pair after a lengthy debate and European Tour chief George O’Grady agreed to the panel’s suggestion of an unprecedented tie.

Both players won their first majors in a red-letter year for Europe in which tour member Louis Oosthuizen of South Africa triumphed at the British Open and Lee Westwood replaced Tiger Woods as world number one.

Kaymer won four times on the European Tour, including three events in a row, and made his Ryder Cup debut in the win over United States at Celtic Manor in Wales.

“This has been a truly great year for me and winning this award is the perfect ending,” said the world number three.

“I’m always trying to follow in (compatriot) Bernhard Langer’s footsteps and to have won an award he first won in 1985 is very satisfying.

“Graeme and I had pretty much the same level of success this season and he deserves this recognition as much as I do,” added Kaymer.

McDowell triumphed three times on the European Tour, gained the winning point in the Ryder Cup and capped a remarkable season by beating Woods in a playoff at the Chevron World Challenge in California on Sunday.

“I’m truly humbled to accept this coveted award,” said the world number seven. “It is the icing on the cake on what has been a very special year for myself, Martin and everyone involved in European golf.

“It is an honour to share this award with a player of Martin’s calibre. He is one of the best players of our generation.”